At Erasmus Research, we stress the importance of understanding what we call the theory / method nexus.  Thinking about ‘method’ encroaches on theory since the decision of what method to use involves a cognitive process which is inescapably theoretical.  Likewise, no attempt to apply a theory can be done without some form of methodological consideration.  Indeed, any application of a theory is by definition, a method.  It therefore becomes easy to see that the ‘division’ between the two is not only false, but represents a concrete impediment to research.  This makes the possibilities of adopting a wide range of mixed methods all the more attractive for the researcher who must make use, not only of every possible technique for data collection, but also of the methods for analysis.

Theory as a Lens

Theory is the lens through which we understand the world. Traditionally, these ‘lenses’ come in two distinct types.  We have the very large lenses (or meta theories), which allow the ‘macro’ level researcher to stand as far back from the immediacy of the ‘action’ as possible, in order to see as much as she can.  Then we have the small lenses (phenomenological theories) that allow the ‘micro’ level researcher to gain an insight into the internal workings of systems, institutions and social groups, in order to ‘see’ the world from the perspective of those who live in it.

Moving beyond social physics (the ‘objectivist’ view of the world) and social phenomenology (the ‘subjectivist’ view from inside), we have designed a theory/method approach that accounts for each perspective, while overcoming the vices of both.  The secret to understanding the world in its totality is to take as the object of study, not one or the other in a set of binary oppositions, but the relation between the two.

Because the mind is a diacritical machine, it structures the world in binary form.  However, although this is how the architecture of the mind perceives the world, it is not how the world actually is. An example of this is evident in the famous ‘Ruben vase’ optical illusion in which a vase can be seen but also two faces depending on whether we see the white as foreground or background.  The diacritical nature of our minds means that it is possible to alternate quickly between them, and it can also be obvious that they are both there, but only one can be perceived at any given time because only one can become the focus of attention at any given moment. A different type of example is the Necker cube, which having no indication of which square is its front and which is its back, is completely open to interpretation, depending on the perspective of the viewer.  Like the Rubin vase, both versions can be perceived, but not at the same time.  Indeed the ambiguity of the cube makes it more difficult to shift one’s perspective once it has been fixed. 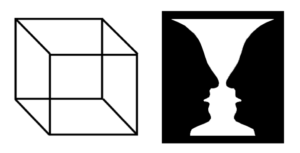 The task of social science, therefore, is to overcome the binary nature of human perception and thought in order to apprehend the world, as far as is possible, in its ‘totality’.  The challenge, is to dissolve the false dichotomies which our diacritical minds construct in order to understand the world as it is, rather than as it appears to common sense perception.  In order to achieve this, it is necessary to highlight the importance of understanding the relational nature of reality.  If, as classical philosophy suggests, the universe is one thing (a nod in the direction of the great Monists), which our minds divide into many things in order to perceive and make sense of it, we need to find a way of reducing the ‘separateness’ we create when we divide the world up.  One such way of doing this is to take account of the dialectical relation between the things we dichotomize.  The dialectical relation between things is what reconnects that which our minds seek to separate.  To say that the relations between things are dialectical is to account for the fact that each has influence over the other.

Erasmus Research has developed the Theory/Method nexus in order to meet the challenges of understanding the contemporary world, in all its glorious diversity and wonderful complexity.  Avoiding the fetishisation of academic concepts, our flexible and pragmatic approach to research is founded upon the principle that theory should not be construed as the master, but the humble servant of empirical inquiry.  Theory cannot be developed but through the concrete research operations that forge our empirical objects.